I admit, I have a fondness for platformers, but there has always been something I’ve noticed; they’re either too easy that you can blaze through faster than Eric Pickles at an all-you-can-eat buffet, or so difficult that the chances of a rage induced aneurism are increased tenfold. There is never any middle ground. Luckily, Galaxy Trail has stepped up, and brought us Freedom Planet, a game that has embraced the meaning of ‘Arcade Difficulty’.

Now, I am not too bothered when it comes to graphics in games, but when I booted up Freedom Planet, I was very impressed with the overall look of the game. Despite it looking like it could fit in the Sega Saturn era, the colours were nice and vibrant, the animation is smoother than melted butter, and the cut-scenes are animated brilliantly. It’s a joy to look at, like a well choreographed martial art movie fight scene.

And speaking of the cut-scenes, I have to say, the story, the setting, and the overall lore of the game intrigued me from the very start. I won’t give too much away, as I want you to enjoy it the same way I did, but what they show during the story makes me want to learn about the world and it’s backstory. Unlike some games nowadays, the characters, especially the main two protagonists, Lilac and Carol, have an actual personality, made even better with spot on voice acting. In a sense, it plays out like an action filled cartoon, with a good mix of drama and wit.

Gameplay wise, it’s fantastic. The platforming has a very old style arcade feel to it. By that, I mean it has a relatively steady learning curve, but there have been times where the computer pulls no punches, especially in its boss battles. However, instead of giving up after the first two attempts, the challenge of the game makes you feel that you have a good chance of succeeding, and that if you give it just one more go, you’ll neat it for sure. I always felt compelled to push on, and try again. And when you finally beat a difficult section, there’s a real sense of victory and accomplishment, so you become more motivated to move onwards. I started the game up, blinked, and before I knew it, a good number of hours passed without me realising. 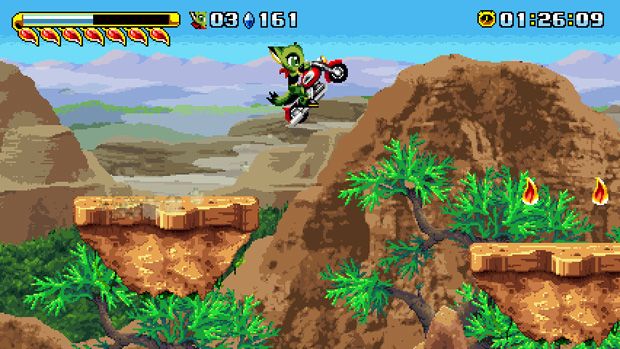 Another aspect I love in this game, and what I like to see in games like this, is the fact there’s a sense of momentum, and actual speed when you get moving. If you look at Fancy Pants Adventure, you’ll know what I mean. However, Freedom Planet does something that I can really respect; more control over your speed. You can move around the level at a steady pace, and traverse the level with a more tactical approach (viewing enemy position, knowing when to attack, and taking your time), but with the push of a button, Lilac can dash forward, and blitz through the terrain faster than a husband running to the shops the day before his anniversary. So you have a better chance to playing the game your way, made even easier with tight controls, and crisp animations, even on a laptop as… defiant as mine.

If I’m being honest, I though Freedom planet was going to be just another bog standard game with a cutsey main character, and nothing special to it, but it really surprised me with everything it had to offer. The challenge encouraged me to keep trying, the story gripped me, and the overall package of the game is an absolute joy to behold. This game really needs more time in the spotlight… Well, it could happen, if Lilac could keep still for more than 5 seconds.