Phew! That was good. Right, where do I start? 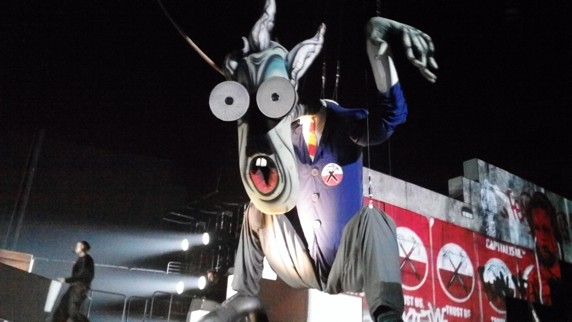 Pink Floyd’s ‘The Wall’ scared the hell out of me as an impressionable youngster. Gerald Scarfe animated, kid-mincing, demonic teachers, Nazi-like hammers, Bob Geldof with no eyebrows, graphic war imagery. It was enough of a reason for me to give them a wide birth for many years, eventually came to my senses, but it took a while.

Today’s re-imagining of ‘The Wall’ by it’s protagonist and creator, Roger Waters is a completely different beast. The original 1979 concept was based mainly around the whimsical everyday dilemmas faced by your average millionaire rockstar, in 2013 ‘The Wall’ has matured into a fully blown anti-war statement that embraces the entire world.

As a live concert event, they don’t come more spectacular than this. At one end of Wembley stadium (across the entire width) is a wall made of 400 white blocks. There are gaps in the middle, as the first part of the concert takes place, the gaps are gradually filled brick by brick until the entire stage is one huge wall 240ft wide and 35ft tall. Part two is played out almost entirely with the band playing behind the wall and Roger in front. Throughout the wall is used as a blank canvass onto which the story unfolds.

If I was the sort of person to participate in the use of illegal substances then I would definitely have done it tonight. Even without them, the incredible image-mapping techniques and animations projected onto the wall are mind-enhancingly breathtaking. Today’s technology advancements (and the artist who have created the amazing visuals) serve to drive the narrative of the story with such verve and aplomb that despite Roger Waters now being 70 years young, his show is way ahead of anything else ANYONE in popular music is doing right now. There are quite a few ‘Wow’ moments and for sheer scale, ambition and execution ‘The Wall’ makes most stadium events look very low key in comparison.

Then there is the music too. The touring line-up includes legendary ex-Pink Floyd live band member, Snowy White and Roger’s son Harry on Keyboards. They are flawless in their delivery, from the first ‘I’m Spartacus’ chant to the syncopated melodrama of ‘Another Brick in the Wall’ (complete with local school kids singing their hearts out) to ‘that’ guitar solo in ‘Comfortably Numb’, ‘Run Like Hell to the acoustic ‘After the wall’ performed in the rubble once the wall comes down, not one note is misplaced or wasted. These combine with incredible sound effects such as gunshots and helicopters; it’s like the ultimate widescreen TV in 3D with surround sound, but in real-life. At one point modern day Roger performs ‘Mother’ as a duet with himself of a video recorded from an Earls Court show 30 years ago. He apologises if it appears “narcissistic”, and it probably is (a bit) but if anyone has earned the right to a little artistic self-indulgence, Roger Waters is the man.

I could get picky and dissect Rogers over-simplistic views to solve world peace, and he steers clear of the current political hot potato in Syria, instead preferring to use the benefit of hindsight in such cases as the Jean Charles de Menezese shooting at Stockwell Tube station by Police after 9/11. The Wall is used to project a fast moving tube train along its width. It stops, seven gunshots are heard and the train moves on again. In fact the imagery is incredibly powerful throughout and some original footage is intertwined with ultra hi-def video to produce a unique piece of art and story-telling. Oh yes, there is also a giant inflatable flying pig.

A noticeable percentage of the 70,000 Wembley stadium crowd seemed to be Fathers bringing their young sons and daughters in tow. They might not get it all at the moment (and even now I still don’t), but I’m sure more than a few will be telling their kids about the time they saw Roger Waters perform ‘The Wall’ one day, and the musical baton will be handed on to the next generation. Amazing and inspirational. Tear down the Wall!!