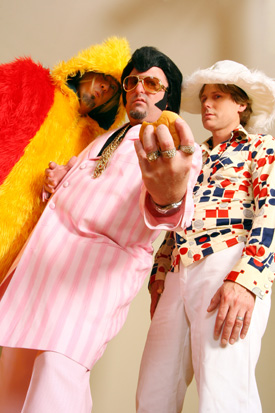 Since 1988 Dread Zeppelin have been wowing audiences the world over with an amazing mix of Led Zeppelin covers (done ‘in da reggae style’), and their own brand of good-time music. It seems like only yesterday, I was heading up to Manchester with a bunch of friends to see Dread Zeppelin play on their first UK tour.

Band mates may have come and gone (Tortelvis even left the building himself for a short while), but if there is one thing you can guarantee at a Dread Zeppelin gig, it’s leaving with a smile on your face (and that’s what it’s all about).

Their legendary frontman Tortelvis took a break from his hectic l(a)unch schedule to answer a few questions exclusively for Flash the Fashion.
Take it away big guy…

Dread Zeppelin been together for over 20 years now, has it gone quickly?
It’s been a whirlwind really. I remember playing at a backyard party next to a pool with high school girls drinking out of red cups in 1989, then a year later were on stage at the Universal Amphitheater headlining with the Buzzcocks support. Then 1500 gigs later I am speaking to you. Hot damn!

You have had several line up changes through the years, have you had as many members as Spinal Tap?
Quite a few members yes! Too much ‘ganga’ and ‘swill’ get you a ticket back to Temple City man, a lot of guys went that route.

Have you ever shot a car in anger?
No, but a few TV sets in Hotels always makes me feel better.

What is on the Dread Zeppelin Rider?
Chicken and Ribs, Monte Cristo sandwiches and a small diet coke.

Do you have any pre-gig rituals?
We sing gospel songs to warm up then Charlie recites verbetim” Tortelvis, despite your age of ___, you are obviously in poor health and way overweight. I know you have come to accept your appearance and so have your fans. Now please watch your step on the way to the stage”.

What is your all time favorite Led Zep song?
‘Thank you’, (Ed- from their 1969 album Led Zeppelin II).

What are the band doing in 2011?
Releasing a new cd, and playing a few shows. Entering our 23rd year, and enjoying the heck out of it!