Break out the sarcophagus because we’re heading to Egypt crew!

Let’s jump into this charismatic adventure, from the talented team at Rebellion, aptly named Strange Brigade.

Set in the historic tombs and chambers of Egypt we join the team, known as the Strange Brigade. The collective of 4 Secret Service agents sent on a perilous rescue mission, quickly finding all is not as it seems thanks to an archaeological fool named Edgar Harbin.

This numbskull released the Spirit of Seteki; a vile and barbaric queen who ruled the area some 4000 years ago. With an eye (or two) for revenge Seteki has made it her afterlife mission to rule the lands again and plunge it into darkness with the help of her undead minions and champions. What is that you say? Not with the Brigade about? You’d be right there ol’ chap!

This third person shooter takes you through many perilous levels either alone or increase the odds of success with friends and go all guns blazing to victory. Aside from the campaign there is a chaotic and brutal horde mode, but make sure to bring a friend or two for the journey. As much as the campaign is story led there are elements of exploration akin to other adventure titles. You can look further for treasure, relics and some annoying blue cats that you get to shoot (side note: I love cats but not these meowing miscreants). 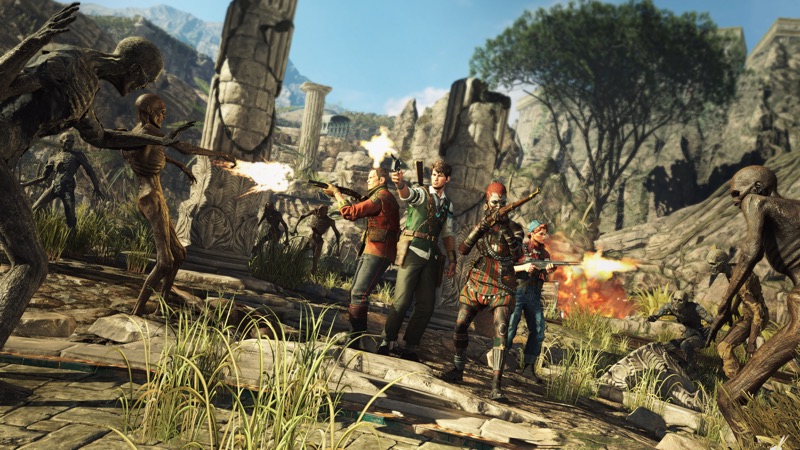 Talking about shooting, a variety of guns are available to hand, some at a cost and all with the chance to upgrade. Enchanted stones found throughout the game allowing various increases in ability from health regen (my fave) to increased weapon speed and reduced recoil to name a few. Strange Brigade is full of explosive action mainly due to the interactive environments and traps surrounding you, aiding in bringing down the various shapes and sizes of Seteki’s army, but be warned you can be injured too… so use them wisely!

Time really must be taken to show appreciation to the writer’s and the narrator on the games personality all throughout. This left me entertained whilst anticipating what would be said next, let alone playing the actual game.

Strange Brigade has been a blast to play on my own and with friends online. Apart from some gameplay seeming a little repetitive at times, I struggle to find any standout negatives to put down on paper/ screen apart from its lack of scope to replay, even horde mode will become a chore. All aside ’tis but a scratch on the delight that Rebellion have provided to us. Available for a smashing £35 you’ll be up for plenty of fun and shenanigans, ’til next time team!

Platform: Xbox One, Playstation 4 and PC.
Available: From August 28th

Luke Lavelle. Designer, Gamer and Reviewer. Mainly residing in a world of vector art and throwing words for FTF! Love for all things Gaming, Technology and all geekery goodness... Catch me on XBL IIII Monk IIII or twitter @luke_lavelle