When my copy of Tales of Graces F dropped through my door, I must admit I had mixed feelings, I didn’t know what it was, I wasn’t expecting it, and I’d not even heard of the Tales series before. Some online research (thanks Wikipedia) told me that ToG is the 12th instalment in the Tales series and that whilst originally released on Wii and then ported to PS3, it has actually been out a whole 2 years in Japan already!

So, the series has somewhat of a serious following in Japan, and I can totally see why. It has a rather interesting blend of anime cut-scenes and game-play, which I can honestly say I found truly enjoyable. The dialogue had me laughing so loud I worried the rest of the house, and the story is really engrossing, I soon found myself treating the game almost like a movie… a reeeaaallly long (around 40 hours of story, 10 of which I did in the first day) one, in which I had to win the fights.

This brings me on to the battle sequences, they’re… different… in almost every other way, the game plays like most other Final Fantasy-esqe RPGs, but the battles are short, frantic, and really remind you that you’re playing something made by Namco. Basically, ‘X’ is your weak or normal attack, mashing it multiple times (and swinging the left stick) does combos, and ‘O’ is strong attack which, again can be mashed and combined with the left stick for combos.

I’m sure that someone may tell me that I’m being overly simple here, but my argument is this: why would I put more effort in, if what I’m doing is working fine? 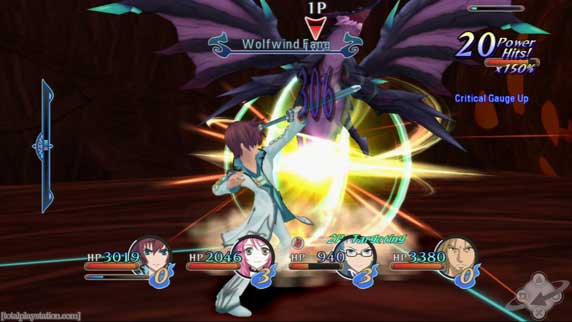 A really nice addition to the battles is the ability to get your friends involved. Simply switch on another controller and a friend can take control of one of your team-mates and join the fray. I’ll be honest, this didn’t go so well for me, the only person I had to hand was my (long-suffering) girlfriend, and she really didn’t understand what was going on. I don’t blame her, the battles are absolutely mental and really do take some getting used to. Don’t let that put you off though, the game eases you into it and by the time you’ve been playing a couple of hours you know what you’re doing.

The strangest thing about the battling I’ve found is the ability to set it to full auto, and just watch the battle play out. I even tested this on a boss, and sure enough, my team just carried on and won the fight on their own. I suppose if you’re not into the button bashing fights then you can just focus on the strategy of levelling, but I think that might get slightly old if you’re not actually using the abilities yourself.

But, that isn’t a bad thing. Oh no, what that is, is an opening to the game to all those fans who just want the story, the charming, beautifully crafted plot and the stunning graphics which really do make Tales of Graces one of the best RPGs I’ve played in years. 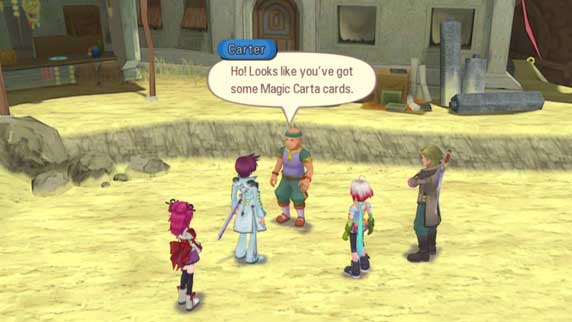 In summary, ToG is a well-made, funny, exciting and action-packed romp through the anime RPG genre which passes many of us by (myself included) over here in the west without a thought. If anyone from Namco happens to read this then please, don’t take so long to send the next Tales game over to the US and Europe, it’s been amazingly good fun and we need it in our lives!

Games/Tech/Music enthusiast. Passionate about Mental Health issues. Can be found on twitter @CaptainPoppin

Thanks to @rebeliciousdrinks for these #cbd infuse