The RCZ has been around for over a year now, and despite a low profile in the UK it’s been a relative success story for Peugeot, selling over 30,000 units worldwide.

Unusually for a Peugeot it was developed by their in-house designers and it feels like they have relished the opportunity to add a splash of colour to the Peugeot range.

Initially made only as a concept idea shown at the Frankfurt Motor show in 2007, the RCZ received so much positive attention the decision was made to develop it for production. The on the road version still retains it’s futuristic looks and is certainly a head turner.

When people complain all cars look the same nowadays, show them a picture of the RCZ. Kids point at it, older gents will ask you about its bhp capabilities (200bhp, if they do) and almost instantly young and attractive ladies will want to go out for dinner with you in it.

Park it somewhere and 999 times out of 1000 you will be happy you are driving the RCZ and not the car next to yours. There will be visual comparisons to the Audi TT, but based on looks alone for me the RCZ is a total winner.

The distinctive double bubble roof is inspired by Zagato, the famous Milan based design consultancy and from the outside looks like one continuous sheet of tinted glass. Combined with some unique styling features the car cuts a unique presence on the road.

I did a lot of miles in the RCZ the week it was with Flush the Fashion and it’s a fun car to drive. There is a good turn of acceleration, especially in higher gears and although the 1.6 engine is virtually the same as the one in the new fast Mini’s (it was jointly developed by Peugeot with Mini/BMW) it still gives off a gorgeous roar (courtesy of a membrane in the dash to amplify the noise) to give you that feeling of power.

For a ‘sporty’ car emissions are pretty good (139g/km of CO2), so it is also relatively green. Obviously it can’t match the more expensive ‘supercars’ in terms of performance and acceleration but there is a great feeling of all round balance when driving the RCZ and with a top speed of 147mph (if you can find a race track to race it on) it’s hardly slow. 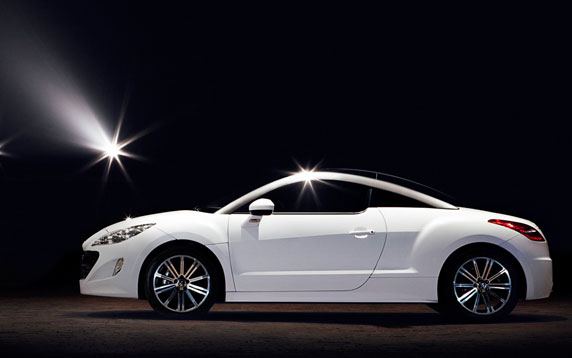 Inside, if you are 6ft (like me) the car is big enough, but only just. As far as passengers go, the bigger the front ones are, the smaller the back ones have to be. My seat was virtually touching the rear ones, so it’s never going to be a ‘family’ car unless your name is Snow White.

One nice touch though is the back window, it comes right over the rear seats giving any ‘small’ passengers a superb panoramic views.

The interior on our test model was stitched Nappa leather with a chrome finish to match the exterior pillars, and while not opulent the overall feel inside is one of quality.

The dashboard is well laid out although from a lower driving position the stereo did feel slightly out of reach. The great 6 speed gear box is helped by a small gear stick and gear changes are smooth. The Air Con is good, so are the heated seats, stereo and there is a handy usb/aux connection. After 2 hours in the drivers seat there wasn’t a numb bum to be felt.

Oh, and the boot is bigger than you think it will be too, especially if you fold the rear seats down.

If you want to stand out the RCZ could be for you, it has bags of character and I only saw one other on the roads all week. Put it next to a brand new Porsche and it starts to look inferior, but it is a potential rival for the Audi TT and similarly priced VW Scirocco.

A top of the range RCZ is not much difference in price (around £25,000) to the most basic TT and I saw hundreds of those on my travels.