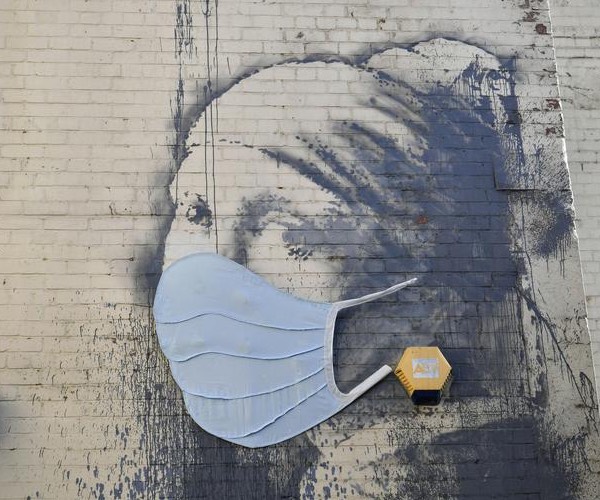 Made excuse after excuse: It was too late. It was too big. It wasn’t my place.

Like many of us, I had a really hard time processing what’s happened (so far) in 2020.

I held my kids tighter and closer. I kissed my wife longer and deeper. I coped by distracting myself more with new memes and old movies, at-home workout routines and extended playtime with the kids, I took long walks and short walks and took my past civil liberties for granted, filled my notebook with big plans and my cart with bigger bottles. With every passing day as the news seemed to grow grimmer, I’d run through every possible emotion stopping at numbness.

I’d thank God I was alive. I’d think about how lucky I am. I’d think about my wife and kids and the toll this was taking. Children of The Pandemic. Kids of America 2020. My fucking God, they’re just children. I’d get angry and curse and cry and laugh and drink and distract. I’d turn the music up louder. I’d watch my kids dance and smile. I’d try to hold onto that. Capture those moments to get me through the minutes of the day that stretched longer and longer some days.

Some days I’d sleep in and have vivid and horrible dreams I couldn’t wake from or didn’t want to, with every intention of not waking up til the real nightmare was over. Some days I’d wake up early paranoid about police states and neighbohood militias, standing at the ready with a mind set to maim or murder anyone whose intent was to bring harm to my family. Some days I’d find inner peace and accept everything in the universe exactly how it is with no intention of disturbing a single thing (some days). Some days, I wouldn’t even look at my phone. Some days, I couldn’t even set it down.

I thought about the duality of everything. I considered the gentle nature of balance and how completely fucked and off course we truly were. I wished for greater leaders. I wished our lessers dead. I wished for a re-do. I wished for the reset button on this obviously buggy version of the simulation. I wished for IT help that didn’t require shutting down. I shut down so much in the past.

I wanted to be open. I didn’t want to be scared and closed off. I wanted to turn off my mind, relax, and float downstream. I wanted to understand how one person’s broken psyche and hurt feelings enacted a vendetta, brought down a democracy, installed a syphilitic bigot and enabled all of his actions and inactions to destroy so many lives. I wanted to understand how my brothers and sisters of this once great nation could be so easily brainwashed by an immoral and inept imbecile. What I really wanted though was to know that this was in fact the final straw and I wanted a guarantee that not even foreign interference, disinformation campaigns, cyberattacks, and voter suppression could stop the end of a mad tyrant’s reign from coming swiftly in November.

I wanted so much for this to not be political. I wanted everyone to realize that it didn’t matter what side of the aisle the person in power sat on, they were wrong and that wrongness was either killing us now or was going to get us killed sooner than later.

Stir-crazed minds growing impatient and more closed, hearts growing colder and while temperatures rise and places reopen. Cases rise and cases spike in places where masks aren’t worn. More sick. More dead. Go on vacation. Go to a rally. Get your hair and nails done while the world burns.

Then came the video. “I can’t breathe.” Then came the sadness, the anger, and the outrage. Floyd and Taylor on our lips. Floyd and Taylor on our minds.  Then came the response, the hatred, the protests, and the violence. Responding with such severe viciousness and unjustifiable inhumanity. Responding with chemical grenades, pepper spray and wooden bullets. Responding to anger over sadness of brutality with anger and brutality. Then came the revolution. Black lives matter and your racist POS lives don’t. Some of the many who were white from the all finally understood a little more and a little better that the few left out of the all were black. But the black weren’t few, didn’t deserve few, and should never again be treated and perceived as few. The MAGA-holes and KKKarens cried over toppled racist monuments. The rest of us cried over racist governments not yet toppled. This God forsaken year is not over and what’s sowed will be reaped. The greatest comforts and little joys that made a big difference came from the open hearts and open minds of those who cared. To the ones that cared enough to keep trying, thank you. To the ones that may have grown impatient but never gave up, thank you. To the ones that wore a smile under their mask in the face of so much idiocy and opposition, thank you. To the ones who offered to teach, to educate, to demonstrate, to accommodate, to entertain, nourish, to serve, to stay home, to stay vigilant, to listen, to create art, music, film, books, articles, and to all who pressed play, hit record, plugged in, tuned in, captured and recorded life, the world and everything during the pandemic, thank you.

It’s hard to hope and it’s harder to inspire others to hope. But, to badly misquote Maya Angelou, “Once we know better, we can do better.”

Better is aspirational and better is a good If not difficult goal for us to set so late in the year, but better is relative and this incarnation of better seems doable. Let’s think on, pray on, work on better.

After all it’s 2020, it’s only July and it could definitely still get worse.

I'm a writer who knows more about music, film, and pop culture than I do about load bearing walls, stabilized population growth, or animal husbandry.