You don’t actually have to even dig to find the filmic treasure that is Paul Greengrass’s ‘Captain Phillips’. It’s right in front of you, as large as the subject, a lumbering giant American oceanic cargo ship called the Maersk Alabama, helmed by Phillips (Tom Hanks) who unbeknownst to himself and the crew, are en-route to a hijacking by Somali ‘fishermen’. 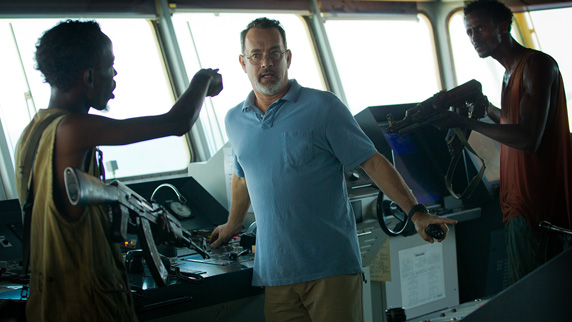 Bringing together an armada of Greengrass’s superlative abilities, with echoes of ‘Bloody Sunday’, ‘Flight 93’ and even touches of the Bourne series, to tell the tale of two opposite ends of global economics, that is both epic and ultimately intimate at the same time, without breaking flow, we steer through very dangerous waters, Greengrass as the coxswain.

Added into this maritime soup is the creeping realisation that we the audience, are basically frogs being slowly boiled alive, such is the levels of pressure though initially gentle, rise rapidly building pressure to near internal explosive levels in the viewer. I can safely say, I’ve never got so stressed in watching a movie. That may sound negative, but it represents the near genius levels of Paul’s directing abilities and the terse/tense script from Billy Ray. From the first sighting of the Somali’s on their miniscule skiffs and their ramshackle metal ladder, everything changes.

Powered by mongrel engines and copious amounts of Khat (a plant chewed in many African regions for their stimulant properties), the African ‘fishermen’ are cast out by local gang lords to capture the spoils of the whale like structures that float by, each bloated with western value systems (Somali dreams) in the form of ‘prized’ material objects. Failing that, ransom. There’s a lovely comment from the newly risen Somali lead hijacker Muse (stunningly played by first time actor Barkhad Abdi) who presents the simple reasoning of giant western fishing ships coming into their local seas and harvesting all the fish, leaving no genuine options for their economic survival. Indeed, there is many parts of the world where the mere concept of options are in themselves a luxury anointed only to the monied.

Greengrass to his credit is no shirker of politics, and quiet rightly doesn’t apportion blame to any particular body in who’s responsible for what unfolds (the West is clearly messed up though). What becomes very clear is that everyone is a disposable pawn, in a economic/greed/dependency chess game that is being played by folk we never even see, our bosses. Despite their absolute physical and origin differences, both Captain Phillips and Muse are more alike than they wish to acknowledge.

The story was well covered in western media when this event actually happened in 2009, thankfully I hadn’t seen all of that no doubt wholly biased presentation, though I was aware of the story from elsewhere. To maintain the full impact of what unfolds, it would be best to not read up anything on the story. However, even with my meager awareness, it’s devastatingly effective cinema. Without giving anything away, there’s a singular moment (you’ll know it when you see it) where Tom Hanks instantly (& deservedly) should win this years Oscar.

That necessity to not give away any of the story doesn’t leave much room on the radar for a review. I will however say, even when the American ‘might’ is placed on the board, it comes across as mega-lomaniacal and hubris against ordinary folk who have absolutely nothing to lose. It could have come across as a futile multi-million dollar anti-piracy ad, but in a

world of minnow Davids and corporate Goliaths, the giants make the mistake that they can beat down/suppress the lesser, but the diminutive aren’t trying to win, they are trying to survive, and that’s much more dangerous.

Captain Phillips is out today, and released by Sony Pictures Entertainment.