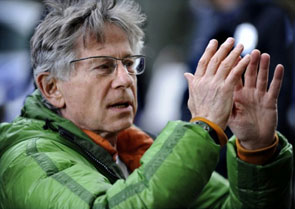 I remember reading a review for this when it came out at the cinema and being a big fan of Roman Polanski (pictured) films (esp the Fearless Vampire Killers) made a mental note to see it.

As sometimes happens when I hear about a new film, I suffered an overdose of media exposure to The Ghost Writer. This took me on a journey from being interested about the film – to wanting to see it – to not being that bothered to – Oh… I’ll catch it on DVD. Once the fuss had died down, I was able to watch it without expecting it to be the worlds greatest film.

Luckily for me it’s not the worlds greatest film
Taken from the gripping Robert Harris’s bestseller Pierce Brosnan plays a former Prime minister writing memoirs when his ‘ghost’ writer is found washed up on the beach.
Is it suicide or foul play?
Ewan McGregor (yes, you do see his bum in this one too) becomes the new ‘ghost’ stumbling upon the clues to his predecessors death and the truth behind a major political conspiracy.

My major gripe with this film is that for some reason the cast (including Tom Wilkinson and Kim Cattrall), all sound as though they have been given the wrong accents. Ewan McGregor has a dodgy mock’ney cockney accent, Wilkinson is an american and Cattrall plays an Englishwoman, Brosnan’s is er.. erm…

None of them are convincing enough and the film may have worked better for me if it had been cast with unknowns. Instead at times it feels like James Bond, a young Obi one and Sammantha from Sex in the City doing funny voices at each other.

On the plus side
The film IS beautifully shot, mostly on location in Germany due to Polanski’s reluctance to go to America (Germany doubles as Cape cod) and at times their are periods when we get hints of the excellent thriller this could have been. Unfortunately the pace never sustains long enough to keep momentum and as soon as the film gets going it grinds again to a halt nearly as quick.

If you like political thrillers and conspiracy theories and you can take your brain out of negative and into positive you will enjoy it, personally I am just glad I waited till now to be ever-so-slightly underwhelmed.

Do you enjoy writing? Would you like to review a film for Flush the Fashion?
Click here for more info.