I often amuse myself by turning on my speakers to their full capacity, upping the treble, doubling the bass and dancing around pretending to be Karen O or Roisin Murphy or Grace Jones. 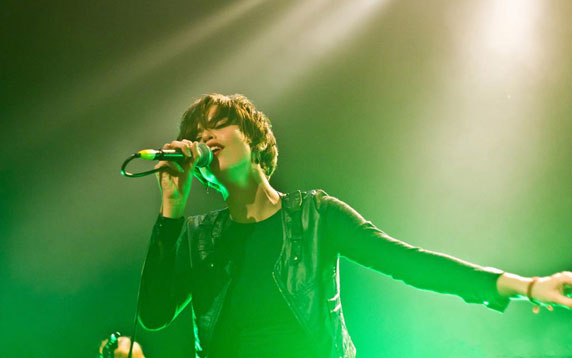 These are clearly very private moments and my aspirations of leading a band on stage, with all my doting fans screaming and dancing will perhaps remain limited to my neighbours hearing me through the walls however, dreams they are still.

Just as Hayley Mary (lead vocals) took to the stage, my gig partner for the night, turned to me and said “This is the kind of band I’ve always dreamed of fronting”. Before being able to excitedly confer with her my exact same dream Hayley, Heather, Nik, and Samuel – the foursome that comprise The Jezabels – threw themselves wholeheartedly into the first song of the night, Endless Summer. This would also be the first song at their first gig of their first LP tour. Ever.

I was shocked to learn that despite the band being around for the last few years, Prisoner was their first real showcase release. Of course prior to this they’ve given us EP’s such as The Man is Dead, She’s So Hard, and most recently Dark Storm but not a full album until now.

If I was onstage I’d be hoping the whiskey I’d been swilling would kick in. These four however, had nothing to be nervous about. Weaving through tracks seamlessly from ‘Prisoner’ we were treated to Easy to Love, Rosebud (one of my faves) and City Girl. The latter reminding me one of the reasons I love this band is their ability to create some wonderfully colourful lyrics like “Rubbin’ them titties on edges of cities and worlds”.

Thrown into the mix were a couple of sounds from their previous records like Mace Spray and A Little Piece that the audience treated with the excitement that only familiarity can bring.

Their sound is cinematic. You feel like you’re being driven around at 90mph through some neon lit city at midnight and all you want to do is go faster and listen louder. It’s reckless but it doesn’t matter because Hayley’s voice is booming and Nik is crashing down on the skins of his drums like he has no other purpose.

Too soon came the encore, Peace of Mind and Hurt Me – a balanced selection of soft and wild. At the end I witnessed a sea of a thousand arms in the air, swinging like metronomes, 1000 joyous fans and a band that deserving the enormous applause from their hometown crowd.

The ‘Prisoner Tour’ kicks off in the UK on July 1 at Hop Farm Festival before supporting Garbage on a few of their tour dates, finishing off at T in the Park on July 6.

Now if you’ll excuse me I have to go and work on my stage-diving skills.