The Heroes of Contemporary Punk Set out their stall in Glasgow

GALLOWS IS dead. Long live Gallows. If there’s one thing to take from tonight, it’s that – for all their spit and fire – this is not the Gallows of old. They’ve kept the old crowd though. King Tut’s is rammed tonight, and the masses are baying for action. 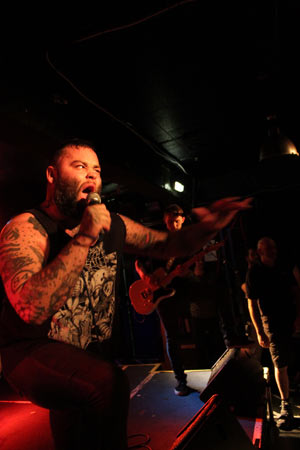 First up, looking increasingly slicked-back and at ease catching fire in front of rammed-in audiences like this, Feed The Rhino make for a formidable support. Jamming out their original blend of punk, hardcore and grooving rock n’ roll as well as generous hints of their more-recently expanded sound they kick up more action and expend more energy than you’d think any band supporting Gallows would have the right to.

Early on, as the crowd begin to rock along, a venue official asks frontman Lee Tobin to cool it down a little. How does he respond? By hurling himself face-first into the front rows of course.

Having matured from confrontational underdogs into something altogether grander on this round of shows in support of second LP The Burning Sons, the Kent boys have very much become a band to watch. What makes that all the sweeter is that they’ve surrendered so little of the jagged edge that’s gotten them there.

By contrast, Gallows seem very much to have grown from a band who’d turn up to a venue like this keen to tear the place apart into one more interested in really putting on a show. Gone is Frank. And gone to – for better or worse – is the unpredictable sense of chaos (if you can count throwing yourself off the stage at EVERY SHOW as unpredictable) that he carried with him.

Wade makes for a sturdier proposition. The man’s a vocal powerhouse, a punk showman and an international star of the genre. When he cuts loose, you know. On newer tracks like Mondo Chaos and Last June (with its rabble-baiting A.C.A.B refrain), his audience are both captivated and engaged. When regaling them with tales of his affinity for Scotland’s “Buckfast-punks” he drips charisma. 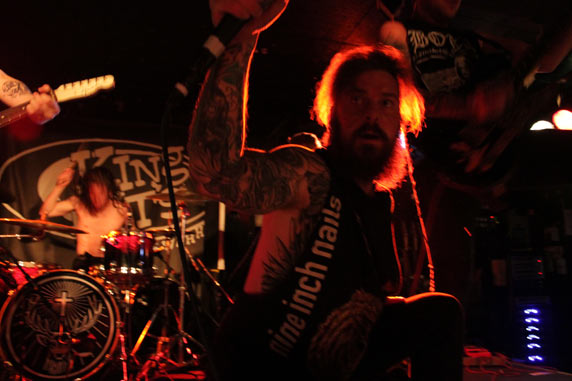 When announcing that (bassist) Stuart Gili-Ross isn’t present tonight because “he had too much fun in Newcastle last night” – and ended up in police custody – he walks the line between professional disappointment and punkish glee. He’s not afraid of a stagedive, but you get the feeling his are more nuanced ploys than red-mist whims.

The rest of the band don’t look much changed. The music remains a lurching combination of energy and atmosphere. Riffs snarl with menace. Drum lines explode. The whole thing seems stuck together with daring, spit and bile.

But therein lies the problem. Gallows are a band struggling desperately to get away from the Brit-punk template. Their past incarnation ran on the blisteringly harsh certainty that there’ll be no future. This version want to build themselves a career. There’s more missing from the likes of London Is The Reason and Orchestra Of Wolves than Frank Carter’s inimitable howl. What’s missing is the strength of their old convictions.

That’s not to say this band don’t have a future. The rammed-in crowd tonight singing along newer numbers even louder than the old can attest to that. What it is to say is that that future needs to be divorced from their past. Great things await if they can unlock the potential of this re-jigged setup. In order to unlock that, though, great things passed will need to be left behind.