Ever since we found out that we were playing the legendary John Peel Stage at Glastonbury this year, we’ve been walking on air, but the mind-blowing reality of this fact only really sank in as we drove through the festival gates on the Friday and glimpsed the enormous blue and yellow striped tent which would be the venue for our show. 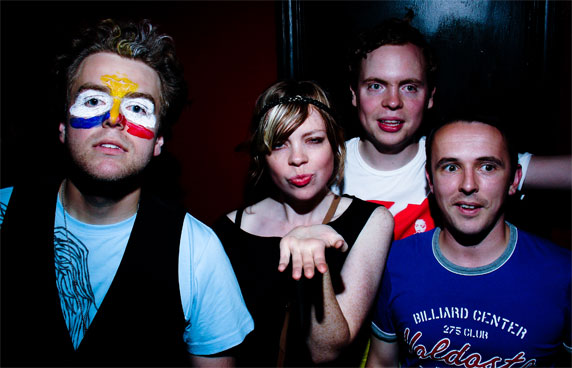 Over the years this stage has played host to some of our most favourite bands, and this year was to be no exception – it was a great feeling to be sharing a stage with the likes of Robyn, The Streets, Everything Everything, Warpaint and The Joy Formidable.

We spent a rainy Friday night putting up tents and exploring the vast site – James getting his bare foot stuck in the sinking mud in the process – before taking refuge in the John Peel backstage bar, not out of any real desire to hang with the stars (of which there were a few glimmering away in the darkened 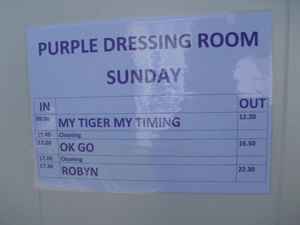 corners), but simply because it was the only dry place on the site.

And they served alcohol.

The next day we awoke to glorious sunshine and ran over to the JP tent to catch Warpaint and meet up with our buddy (and producer of our first two singles) Andy from New Young Pony Club in the process – what a magical atmosphere, old friends, blissful weather, those ethereal melodies drifting across the crowd, the smell of weed, sweat, beer, baking mud – this was the Glastonbury I had been told about.

The rest of that day passed in a beautiful haze, we ran into more friends, including Ross, the director of our new video, and relived our teenage years hollering along to Jimmy Eat World and getting a lovely sunburn in the process. That night, back at our now-customary haunt at the JP bar, we ended up hanging with the band who had opened the stage that day, who regaled us with battle stories and advice for our impending set the next day.

Sunday morning we got up early and headed over the the stage to load our gear – this was the first time we’d had a chance to step onto the stage, and man, it felt big. We went back to our dressing room and started warming-up.

It seems really cheesy but there’s nothing quite like all singing together at the tops of your voices to really make you feel united and unstoppable before a show, we sound like Vikings…pop Vikings!

We weren’t sure how many people would actually be up at 11 in the morning, so it was the best feeling in the world when we walked onstage to see a huge crowd waiting for us, singing along, clapping in time – what a buzz! 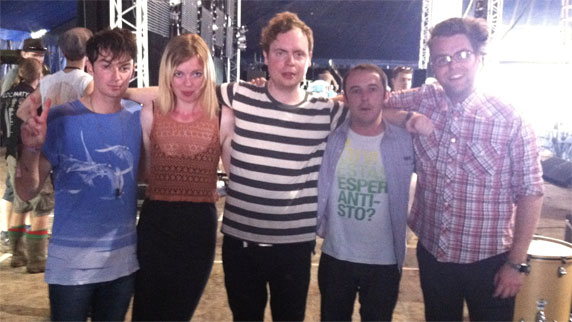 Almost the instant that we came offstage we wanted to go back on again – so much had led up to that point and the show seemed to go by in a flash, but it was an unforgettable experience, and one we hope we can repeat when Glastonbury returns in 2013.

Keep up to date with My Tiger My Timing on their website www.mytigermytiming.com

Latest
This was an amazing show last night from #pianocit

Thanks to @rebeliciousdrinks for these #cbd infuse