Imagine, if Conan the Barbarian and Braveheart spent a drunken night together and things took a chemical turn for the freaky. Now imagine if nine months later a new badass warrior was born (don’t ask me how). If it did happen he could well be the star of a new Xbox Live Arcade game called Bloodforge. 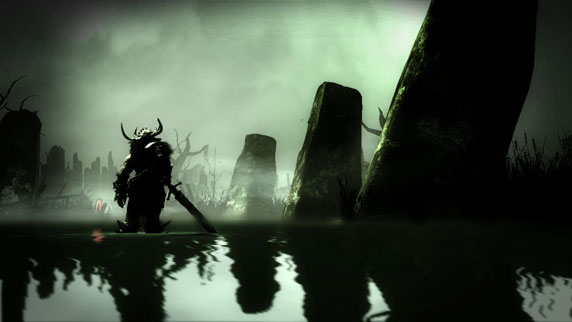 The game revolves around a barbarian-like warrior named Crom, a man whose taste in headgear looks like it comes from the “Cranial Chic” range. One day he returns from the daily hunt to find his home attacked by a band of demonic mercenaries. They are soon dealt with thanks to Crom’s favourite brand of justice; Homosapien carving.

In the ensuing chaos Crom is tricked into killing his wife, and thus goes on a quest for revenge. Not the most fun game I’ve played I grant you, but in this setting it works.

Bloodforge is essentially a cross between Splatterhouse and Dante’s Inferno; a hack and slash adventure game, with emphasis on hacking. You explore various dark and gritty locations, taking on various hordes of barbaric minions along the way. It has that Viking and Saxon feel to it, and there’s no reason to delve too deep into the mindset of your character. There’s a sword and a fleshy target, apply sword to fleshy target. What more do you need?

Similar also to Devil May Cry, you have a light and heavy attack to chain together, and to fight the enemy. You gain a better score by chaining combos together, and delivering the most brutal finishing move. The more blood you acquire, the stronger your magic attacks are, which are great in a pinch. What it lacks in finesse, it makes up for in the sheer impact of its execution.

For example, you can deliver a ‘one hit kill’ in Fury mode to a larger enemy, by jamming your sword into their gut, and dragging the blade across your victim’s abdomen. It’s such a shallow, but entertaining feeling to fight multiple enemies, hacking away until you have so much blood even Dracula would feel queasy.

This is barely any sophistication in this game, but it’s still a lot of fun. Bloodforge manages to tap into primal urges, and please the animalistic side of our brains. Like a caveman taking down a deer with his bare hands, and walking away triumphantly.

I enjoy my RPGs and tactical games more, but I’m not above giving a demon a very thorough acupuncture treatment with a broadsword every now and then (especially before teatime).

Changes in the individual....