The premise of ‘San Andreas’ can be summed up as simply as this: Dwayne “The Rock” Johnson vs. a bloody big earthquake. And that’s it. But, avid reader, is this a case of San Andreadful or San Andrexcellent?

Or possibly San Andractually not that bad without being all that great either?

Well, to figure out if ‘San Andreas’ is actually any cop or not, we need to agree on what would constitute an adequate degree of cop in this case.

Did I mention the entire movie can be boiled down to Dwayne “The Rock” Johnson vs. a bloody big earthquake?

Okay, you can probably appreciate then that for any review to start wittering about unconvincing characterisation, blathering about implausible leaps of narrative logic, or flannelling about dialogue which treats the viewer like a squished kumquat is a bit like Jay Rayner striding into your local chippie and slagging off the sausages in batter for being somewhat less than cordon bleu cuisine.

Ignoring Big Steve’s enraged reaction to his bangers being slated by a gone-to-seed musketeer and focusing instead on the 3D B-movie in hand – perhaps a more useful couple of yardsticks against which to measure ‘San Andreas’ are how it compares to its fellow action-disaster flicks and how it rates against other Dwayne Johnson-starrers.

Let’s start with the former, eh?

Presumably we can agree that the disaster movie – certainly in its action-heavy, CG-augmented modern form – is an exercise in licensed nihilism. We, the great movie-going public, are invited to derive a sadistic pleasure from seeing the smug certainties of the everyday society we know and barely tolerate being smashed to little itty bitty smithereens.

But at the same time, there’s a code to all this devastation; the carnage comes with its own moral compass. If you’re a punk, you’ll go out like a punk, with the peanut gallery invited to cheer your demise. ‘San Andreas’ certainly conforms to this template (as it does a great many others) – most hilariously when Kylie Minogue (seriously) shows up as a snide lush, only to be vacuum flushed out the side of a skyscraper scarcely 10 seconds later.

Of course, Daniel’s whopping fiscal reserves initially leave Ray feeling as inadequate as you or me might were we to find ourselves on the same beach volleyball team as Johnson. But sure enough, no sooner has the shaking started than the big swinging dick shrinks to flaccid wimp, thus allowing the karmic law of the disaster movie to assert itself and the audience to understand that this is the second-biggest knob Gruffudd has ever portrayed onscreen (he was Blair in Oliver Stone’s ‘W.’, remember).

‘San Andreas’ eschews the sprawling ensembles and wormlike soap opera subplots of the old Irwin Allen all-star fromage-fests, in favour of a leaner approach with a single family unit at its narrative core (akin to noble ‘90s duffer ‘Dante’s Peak’).

In the hands of director Brad Peyton and screenwriter Carlton Cuse, the film’s plot actually plays like a semi-retread of not one but two past offerings from Roland Emmerich, the reigning regent of the modern action-disaster epic. As in ‘The Day After Tomorrow’, the hero heads into the chaos in order to rescue their stranded offspring, and as in ‘2012’, the hero is handed a limp marriage crisis to work through as they simultaneously attempt to save themselves and their loved ones from annihilation. 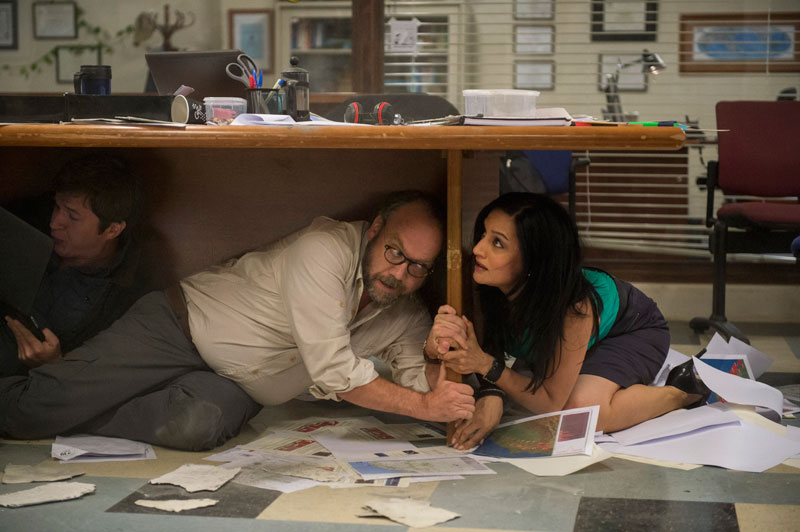 Daddario, incidentally, is not as terrible as you might expect, although she doesn’t look a whole lot like the fruit of Johnson and Gugino’s loins; more like an Olympic swimmer-cum-toothpaste model. Unfortunately she’s saddled with mumbly bumbly hamster-faced love interest Ben (Hugo Johnstone-Burt) and his serial-killer-in-the-making li’l bro Ollie (Art Parkinson). The boys make repeated vague reference to their parents but if Ma and Pa DID show up, you’d expect Mum to be Ollie in best Mrs. Bates frock and wig.

Also fleshing out the supporting cast is Paul Giamatti as Lawrence Hayes, Caltech’s premier seismologist – although you wouldn’t necessarily realise that from the glimpse we’re given of one of his classes, where all his reputed expertise is put to use listing some really, really massive earthquakes. Quite what the not-as-regularly-wonderful-as-he-used-to-be-but-still-rather-wonderful Giamatti is doing in this schlock, his accountant only knows.

‘San Andreas’ demonstrates precious little ambition to put anything like a new spin on the accepted tenets of its subgenre, and it duly delivers its full quota of intricately detailed CG bedlam – from countless crumbling city blocks to a tsunami the size of Sepp Blatter’s brass neck. But there’s an undeniable hole at its centre, and it’s a hole which shares its muscular shape with our main man Johnson.

An entertainment industry luminary for the better part of two decades now, Johnson’s silver screen career remains a tricky critter to riddle out. For all his fame, there’s a lingering sense that he’s never quite convinced as a bona fide film star, with his best-received appearances (most obviously in the ‘Fast & the Furious’ series) relying on the support of his fellow performers to carry him through.

In contrast, when asked to shoulder the burden of a whole movie – as his ‘Journey 2: Mysterious Island’ director Peyton asks him to do here – Johnson’s shortcomings are thrown into sharp focus. Just witness him hamming it up appallingly as he leafs through a box of Blake’s keepsakes, or clanging his one-liners like he’s lobbing horseshoes at the country fair.

No one’s asking the artist formerly known as “The Rock” to transmogrify into an Oscar-winner; certainly not in a movie where the best acting is probably done by the earthquake. He should, however, be able to sell a crowd-pleasing moment or two.

Some will say Johnson’s non-performance is the result of lousy material. But that’s ignoring the fact he succeeds only in making the absolute least of what he’s been given – this supposed real-life superman coming over as nothing other than the one true San Andreas dolt.

San Andreas is out now in the UK.

Paul Martin is a professional writer who lives in Kilburn, north London. Paul Martin is deeply disturbed by the amount of neatly trimmed beards he sees these days, that make the wearers look like Matthew Kelly or a young Kenny Loggins. Paul Martin can occasionally be spotted at @PaulFilmDoom