Our politicians will kill us all.

There are many movies that were not recognised (at least in the context of a financial success) upon their initial release, no doubt due to too many disparate factors. Be it distribution, bad reviews, bad movies, censorship or just timing. Maybe the feature is ahead of it’s time, flying below the Zeitgeist radar. Then again what is the measure of success? What are the success barometers settings? Who decided them, and why? Is success really money? I don’t think it is. I think Truth is success.

Inspired by a book (La morale et l’action by Philippe Legorjus) and previously a report League of Human Right’ Report on Ouvéa that his father gave him many years ago, Mathieu Kassovitz (La Haine, 1995) could never let the story go. It dealt with the tragic story of the brutal deaths of Kanak separatists in 1988 on Ouvéa Island in the French colony of New Caledonia. The Kanaks were about to lose any last vestige of their culture with the continuing evolution of French laws on the island at the behest of Bernard Pons, the French Minister for Overseas Territory.

The story contained the repercussions of imperialism, racism, exploitation, careerism, propaganda and inhumanity. Despite all this, Kassovitz (who plays the author Philippe Legorjus) has injected a great deal of humanity and warnings into the movie adaptation of the book.

Legorjus was a captain of the GIGN (Groupe d’Intervention de la Gendarmerie Nationale, an elite counter-terrorism police unit) who was sent over with a team to the island after an uprising lead by a group of local Kanaks lead by Alphonse Dianou (labe Lapacas), who had enough of the erosion of their home, their rights, their natural resources (nickel), and the frequent brutality that was handed out by their colonial leaders. However the Kanak revolt was ill prepared and resulted in the deaths of a number of Gendarmerie and the kidnapping of 30. Philippe was lead negotiator, attempting to find resolution by peaceful means.

Fanning and actively fuelling the flames of tragedy was the fact that it was an election year with François Mitterrand up against Prime Minister Jacques Chirac. It slowly it becomes apparent that the politicians are not concerned with the lives on the island, and are only concerned with maintaining, gaining political power, at any and all costs.

Even if you’ve never heard of this story (I hadn’t), the outcome is brutally shown to us in the opening moments. In dense nausea we experience the final moments being rerun, backwards, as if the acts of violence are being wiped away one by one, leading us to a state later on in the movie, where we actually have hope for the outcome. Of course that’s the same as expecting the goal to go in the replay. As a device it also acts to bring an ever building frustration and tension to the movie, as the noose of politics slowly begins to strangle the actions and hopes of Philippe and ultimately us, the viewer. 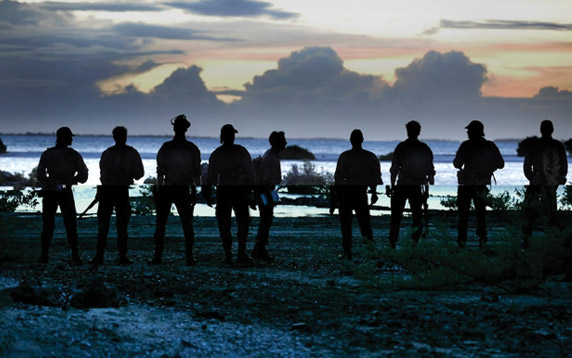 Tactfully Kassovitz doesn’t apportion any real blame to the two main parties in the conflict, be it the Kanaks or the 300 French troops that have been sent to deal (eradicate) the problem, both finding themselves in a situation neither wants to be in, they are ultimately pawns. However, we are left without any doubt at all in the inhumanity and motives of the politicians. Lingering like a demonic presence, no reason can pierce their careerist hide. When asking why the uprising has happened at all, Bernard Pons (Daniel Martin, eerily like Jack Straw) is told it’s because of his Law that he’s introducing. In a complete contrast to the highly established/successful traditions of the Kanaks by where conversational negotiations can go on for days in a quest for unified resolution, Pons simply laughs at Philippe’s comment and ceases the talk. Resolution is not the goal, promotion is.

Rebellion is the natural next stage up since Kassovitz’s seminal movie La Haine (Hate, 1995) which dealt with riots and the police in Paris. It’s a bigger global platform, and although a very nasty skeleton in the closet of recent French history, it’s far more a modern tale that equates to Northern Ireland, Iraq, Afghanistan and any other land where foreign troops were present and the resulting consequences. Even the rewriting/editing of political history this week in regards to the death of Margaret Thatcher and political media propaganda, came to the fore whilst watching it again.

The story could have easily been presented as a sterile documentary. Thankfully Mathieu has taken something that deeply affected him on a human level, and brought his life experience and abilities as an actor/director to share it with us in the medium he knows well. It’s hard, brutal and punches us in the heart, stomach and mind. That may sound like difficult work, but if you are a fan of shows such as The Wire, Breaking Bad, The Sopranos or any other drama that has a high level of intelligence, and doesn’t pander to stupidity, you’ll be richly rewarded.

I’ve seen this movie three times now, and still don’t believe I’ve taken it all in. We were lucky to meet up with Mathieu Kassovitz recently to discuss Rebellion amongst other things. As such, I’ll not write any more here, but will have a follow on piece next week, with a video interview, more back ground to the movie, motivations and incredible people involved in bringing it to the screen.

In the mean time, I urge you treat your mind, heart and soul to this movie, and seek the Truth, before your politicians get a chance to kill you.

Rebellion is released in the UK on 19th April by Lionsgate.

One thought on “Film Review: Rebellion”