The Yankee Pedlar Inn – an actual Connecticut stop-off – is in its last weekend of business. Staffed by directionless twenty-somethings Claire (Sarah Paxton) and Luke (Pat Healy) and hosting a final skeleton guestlist, the ghosts of the hotel’s time-faded glory-days are left to creep the deserted corridors and forgotten halls. 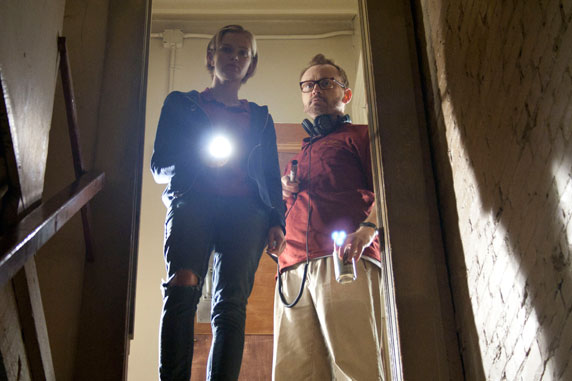 Luke – a loveably hopeless slacker – scrabbles unconvincingly at compiling a document of the hotel’s reputed Madeleine Mallory hauntings while nursing unrequited feelings for Claire. She stalks the creaking structure, inhaler in hand, with a beguiling mix of elfin inquisitiveness and teetering vulnerability.

West had proven himself a major new talent in horror by the frantic closing reel of his slay-tanic debut The House Of The Devil. Here, we see him cut loose. Drawing his palette from not-quite-vintage horror we get menace beneath the floorboards, restless souls of lovers scorned and the deserted 80s interiors of The Overlook. If his building had an elevator, it would bleed.

His trump card, however, is his restraint. Like the most effective horror stories we’re allowed to get to know the characters before the threat emerges from the shadows. When it does, we’re dragged screaming along with them. The Innkeepers might be light on action, but it’s soaked with impending dread.

And even that’s complicated. Struck through with a sense of fractured paranoia and skewed through the lenses of bittersweet loss and hollow tragedy we’re never entirely privy to the substance of the horror. Even faded sitcom-actress turned saturated-spiritualist Kelly McGillis tempers her portentous readings with a sense of self-forgotten sadness.

Crucially, the central performers are strong enough to buttress the inaction. Healy gives good geek – unloved, unmotivated, desperate – but it’s Paxton who’s the revelation. An undecided individual unravelling steadily into a lost soul, she draws attention – and the camera – greedily as the tale weaves on.

As West turns the page on a downer epilogue, there should be an element of dissatisfaction. Thanks to her, there’s only heartbreak; a drawn sadness that’s barely broken by the creepily suggestive sign-off.

The Innkeepers is out in UK Cinemas on 8th June and on DVD & Blu Ray from 25th June.