We’re on a boat! Sadly not the pimped-out party yacht we all hoped for, rather the MZ Rozen, a Copenhagen-registered cargo freighter en-route for India. But hey! Come on! We can all still have a few laughs, right?

Er, no. No, we can’t. Not with Danish writer-director Tobias Lindholm at the helm. Under this skipper, our ship’s only sailing into choppy waters – in the shape of Somali pirates, nerve-shredding hostage negotiations, and a journey to the absolute limits of human endurance. 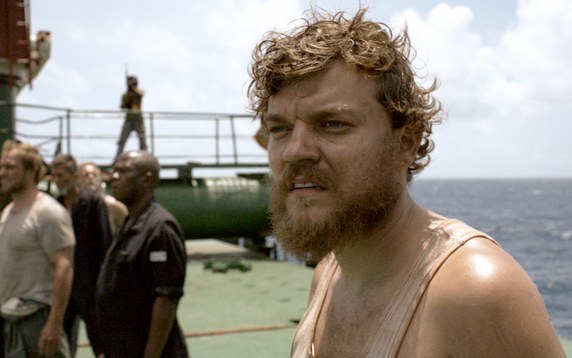 A Hijacking has already enjoyed quite a journey of its own, arriving as it does in UK cinemas sagging under the weight of already-accrued garlands.

After debuting in the Orizzonti strand of the 2012 Venice Film Festival, it also played in competition at London and Toronto, and in March it claimed the Best Film prize at Denmark’s answer to the Oscars, the Bodil Awards (matching the achievement of Lindholm’s prior directorial outing, prison drama R).

Put simply, and rather gittishly, wherever this picture plays, it makes waves.

Hardly surprising perhaps, given the pedigree of that man Lindholm. Best-known for his work as co-scripter on Thomas Vinterberg’s acclaimed pair of Submarino and The Hunt, he is also a prime mover behind Scandinavian small screen sensation Borgen.

And it is from that political drama where he has recruited both his A Hijacking leads: Pilou Asbæk, who plays the Rozen’s cook, Mikkel, and Søren Malling, who plays shipping company CEO, Peter.

The opening minutes of the movie are given over to outlining the characters of these two men. Mikkel’s warm, emotional demeanour shines through via his interactions with the ship’s crew and in a call to his wife, Maria (Amalie Ihle Alstrup). Peter’s ironclad self-assurance, meanwhile, is demonstrated as he, without fuss, cleans up a business bodge left for him by subordinate Lars (Dar Salim).

That done, Lindholm duly takes a wrecking ball to the lives of both. First, Mikkel is thrust into the titular crisis which forms the dramatic crucible of the film. Then Peter is ripped from his corporate comfort zone, as he is forced to bargain with capricious pirate spokesman Omar (Abdihakin Asgar) for the lives of his employees.

But if all this is beginning to sound a bit like the recipe for worthy melodrama, like a thinly-veiled excuse for thespian showboating (groan…), then any such notions should be put to bed as swiftly as a naughty child who doesn’t deserve any supper. Rather, A Hijacking finds Lindholm assuming the guise of auteur monk, fasting from clichés, tirelessly seeking every kernel of truth in his scenario.

In service of this objective, the production actually filmed in pirate-patrolled waters on a previously-hijacked freighter, while leading roles in the story are handed to non-professional actors, including Gary Skjoldmose, a former soldier and real-life hostage negotiation expert.

What this scrupulous quest for realism also signals is the excision of many of the expected elements from the movie-making equation. Out, for instance, go histrionics. Out go the kind of cause-and-effect plot points that prop up the how-to screenwriting industry. Out go one-liners so sharp they could slice a steak. And out go any statements likely to prove spookily prescient in the light of later events. 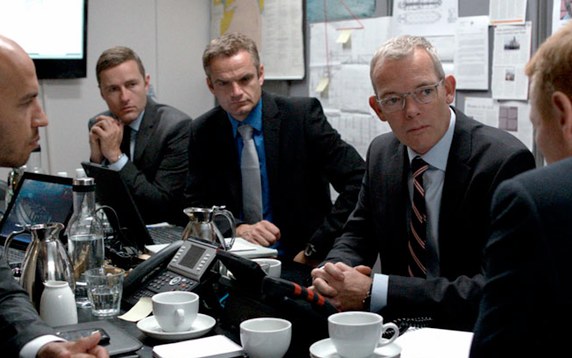 Basically, if Tom Cruise were to wander into this world, he’d be screwed.
The drama is leavened by small moments of fun, such as when Mikkel and ship’s engineer Jan (Roland Møller) show their captors how fearlessly this fishing malarkey is done in Viking country. However, darkness always closely coexists with any glimmers of light – meaning that in the space of scant seconds, Mikkel can go from the joy of hearing his wife’s voice to having a gun barrel cruelly pressed to his neck.

Carried by the combined efforts of the cast, A Hijacking successfully secretes you, the viewer, within its pair of depicted prisons: the claustrophobic cabin where Mikkel, Jan and their captain eat, sleep and piss, and the boardroom bunker where Peter is every second on-edge – this business leader being granted a depth and humanity surprising in a medium where such characters are often stereotypes at best.

The ultimate result is an all-pervading tension which transcends the screen, leaving everyone smart enough to see this excellent thriller on an inexorable collision course with the same emotional juggernaut which so mercilessly rolls right over its characters.

A Hijacking is released in the UK on 10 May