Hailing from the same series that gave us One Direction, Rebecca Ferguson and Cher Lloyd, Aiden Grimshaw finished ninth on X-Factor, but not without leaving us with a very memorable performance of ‘Mad World‘. 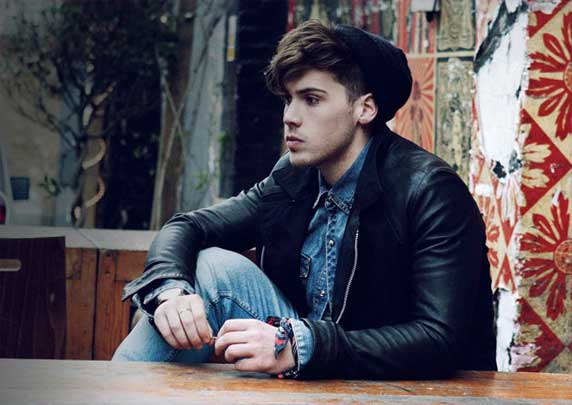 Having waited three years, ‘growing years’ he has said, to release an album this Jarred Rogers (who previously worked with Lana Del Rey) produced piece is a genre bending mix that combines Moby and Damien Rice and adds some Massive Attack. While slightly less doe-eyed and indie as he was on the show, the same intensity that earned him stern criticism from Cheryl Cole is there.

The opening track ‘Hold on’ is reminiscent of the 80’s strand of electro that Depeche Mode made mainstream and more recently The Hurts with a heavy beat background and vocals that are dripping with emotions. Debut single ‘This is Love (below)’ and ‘The Island’ are more pop than other offerings with a hidden sadness in the lyrics that are masked behind a dance beat (much like Lady Gaga’s, Bad Romance). Those lyrics are sung with such anguish, such vulnerability that fans of his X-Factor stint who may be more alternative than drum & bass will look past it.

It’s not a perfect album, the title track ‘Misty Eye’ is too repetitive despite the chilling lyrics and ‘Be Myself’ is a poor man’s version of The Smiths ‘Asleep’ while ‘Curtain Call’ is perhaps not original enough to be a worthy second single from such a wonderfully unique album.

It’s one of those wonderful moments you can’t find a genre to box it in, hardly electro, not traditionally drum and bass, barely pop with a tinge of indie. It takes you from wanting to dance to feeling a deep sadness and then getting confused because you feel both of them at the same time.

Not often can I, or will I say this about an X-factor runner-up, but if Aiden Grimshaw has a long career ahead of him, he’ll do it his own way.

Misty Eye is our on August 20th for more info visit www.aidengrimshaw.com