It only took one gameplay trailer from Rockstar Games to get #GTAV trending on twitter over the course of a few hours. Even Jay-Z had to put in more work than that. Although when you think of how long the Edinburgh based developer have been working on Grand Theft Auto V I think they’ve put in their fair share of work over the past 5 years. 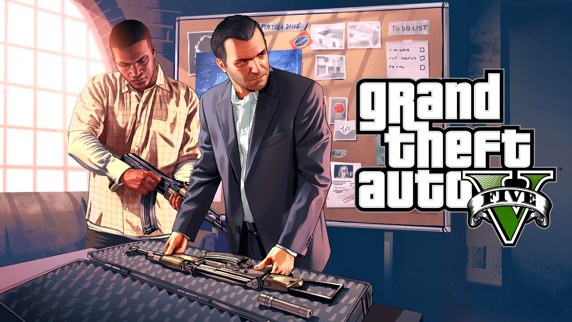 SO what have we learnt from the first gameplay trailer of GTAV? Well perhaps more than anything it’s confirmed many of the suspicions we already had. E.G. It’s huge, there are lots of banks jobs and undoubtedly most importantly, there’s a pet dog.

But if a Rottweiler called ‘Chop’ isn’t going to convince you into buying this here are some more things to itch your trigger finger.

Characters
Arguably the game’s biggest feature is the ability to switch between three playable characters at any given time. Firstly I was sceptical about ‘any time’ as I doubted if it truly meant ‘any time’ or just any time at certain windows throughout the game. But no, whenever you get bored of Michael’s dysfunctional family you can instantly switch to Trevor who may be shitting on a kitchen floor or something equally colourful (it appears he has many interesting hobbies.) Partly what this means is, that when you inevitably cause utter chaos it will in hindsight be 3X more, well chaotic. See from 1.30 to 2.01 in the trailer.

Character customisation is also back which I’m sure is a very welcome return to the many who loved its inclusion in San Andreas. And this time it looks much less tedious. Let’s face it, we’ll all be partial to a good game of golf once in a while. (2.46) The customisation extends from appearances (tattoos etc) to fitness, shooting and driving abilities to macking out cars so they look sweet, for all of three minutes before you inevitably crash it into a lamppost or a not so dissimilar inanimate object.

Weapons
Back to business and one of the first notable things is that GTAV looks to be the first title in the series that includes a ‘weapon wheel’ which appeared in both Max Payne 3 and Red Dead Redemption and is now fairly customary throughout the genre. Hunting is also implemented in GTAV so if you’re having a day where you just can’t stand wildlife feel free to maniacally gun legions of Ibex down. No-one’s stopping you. Also last time out I mentioned the choices you will have to make when preparing for a heist, (this can be seen from 3.54 to 4.16). This means you spend your money recruiting those you want on your team and then you are given the option of going in ‘Loud’ or ‘Smart’ which seems relatively self-explanatory. It’s yet to be seen if you can take a Heath Ledger’s Joker approach to bank robbing yet and therefore increase your share dramatically.

And then, once you’ve made that money you’re free to spend it any way you please. The trailer ends with us being teased about GTA Online, so I don’t think Rockstar have layed all their cards on the table just yet.

I try to write knowledgeable things about music. Everything else I get quite annoyed about. Arsenal fan. Terrible swimmer.

Sometimes it's better to be looking out #istanbul