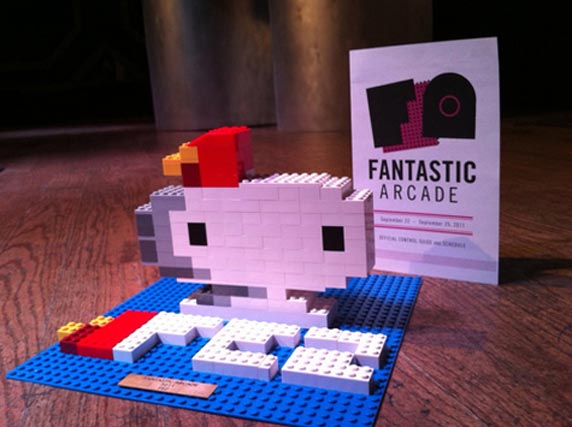 Let’s face it, 2D platforming is the treasured gem from our past. The glee from our childish selves as we leap from ledge to ledge, collecting shiny objects, in order to reach a final goal. Sadly, attempts to bring it into the current generation has never really been all too successful. When developers think ‘update’ they assume ‘shiny 3D graphics, cookie cutter platforming’. But Polytron has given us a new platformer; Fez, which hopes to give a new dimension to 3D (See what I did there?…Ok, Yeah, I’ll get my coat)

The game follows a little white figure called Gomez, who bears a slight resemblance to the Adipose from Dr Who. In his peaceful village, 2D is king, and no one has even heard of a cube. However, soon enough, Gomez is told he must go on an epic adventure, as the all-powerful hexahedron (fancy name for cube) has split apart. It is up to Gomez, armed with his trusty fez, to find every cube shard, and save the universe from collapsing on itself. The characters and location have their own little cutesy 8-bit charm, and is quite reminiscent of old cartridge consoles. Simple concept, but instantly charming.

Controls are very easy to understand: d-pad to move, A to jump, X to interact with objects… and that’s about it really. Well, it would be if Fez didn’t have a very clever trick up its sleeve. While you can only move along a 2D axis (like Mario, Sackboy, Pit, etc.), you have the ability to rotate the whole level, allowing you to discover new paths and sections to the level. Platform too far to jump? Just rotate the landscape so the platform is angled closer to little Gomez. Vines dotted around randomly? Try spinning the level, and they might just align themselves so you can climb up.

This gives Fez a great puzzler twist, as you have to think on 2 different dimensions; where Gomez can navigate, and how the level can be rotated to reveal the correct route to the shards. I was trying so hard to get my head around it I think my brain was doing somersaults… and I liked it. It proved to be a very healthy challenge, compared to the usual platforming.

I love games like Fez; one of games that like to add a little twist to the usual tried and tested genre. It’s why I enjoy Portal, Q.U.B.E. and Stacking, to name a few. Fans of old school platformers will enjoy this for the nostalgia, fans of puzzle games will get a kick from the dimensional challenge, and everyone else will also have a lot of fun exploring the wonderful world with Gomez. Now I think I may need to take a break before I start seeing things in 4D.

Ferz is developed and Published by Polytron and available on the Xbox Live Arcade.
http://polytroncorporation.com