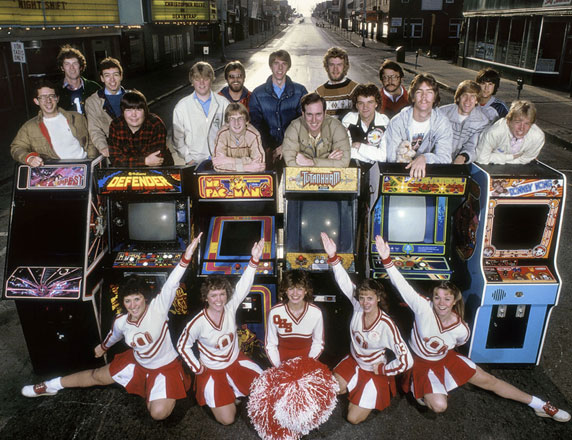 King of Kong: A Fistful of Quarters, isn’t a new film. It came out a few years ago, but for some reason lots of people have never even heard of it. It’s a classic and is the first film to feature in our ‘Movie Gems’ series.

The story centers around Billy Mitchell (4th from the right above), THE number one Donkey Kong Video Gamer for the past 25 years and Steve Wiebe, the challenger to his title, an unemployed teacher with too much time on his hands.

Director Seth Gordon captures the mood perfectly with a unique view into a vintage video game world frozen in time, but still very much alive.

You almost feel some of the characters in this documentary could have been scripted, but (thankfully) they’re all real. The Champ, Billy Mitchell is a strange brooding cross between Clint Eastwood and Chuck Norris, complete with his own hot sauce range and does seems like he’s from another planet at times. While challenger Steve is the underdog fighting against all odds to become the ‘King of Kong’.

King of Kong is Rocky for nerds, a film full of great displays of human endeavours, laughter, moments of sadness and warmth. It’s a great way to waste 90 minutes (and much better than the A-Team).